Why the PRO Act Is Critical 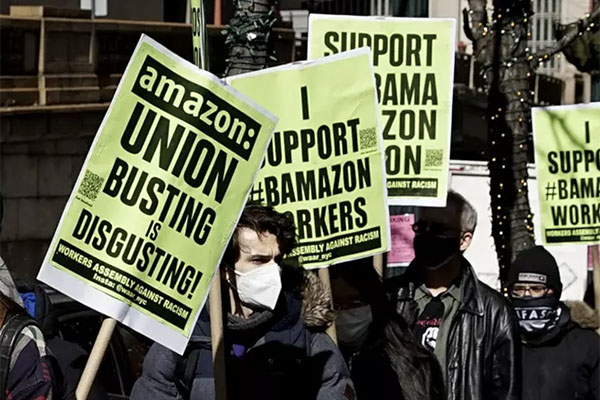 Something I’ve just learned about Amazon – one of America’s most profitable and fastest-growing corporations, headed by the richest man in the world:

According to the Labor Department’s Occupational Safety and Health Administration, Amazon warehouse workers sustained nearly double the rate of serious injury incidents last year as did workers in non-Amazon warehouses.

In addition, largely because Amazon failed to provide its workers adequate protective equipment during the pandemic, the corporation admits that nearly 20,000 employees were presumed positive for the coronavirus.

Workers who spoke out about these unsafe workplace conditions were fired.

Amazon boasts of paying its workers at least $15 an hour. But that comes to about $30,000 a year, hardly enough for a family to get by on.

The explosive growth of Amazon’s army of poorly-paid and ill-treated hourly workers is emblematic of the long-term decline of America’s middle class and levels of economic inequality America hasn’t seen since the late nineteenth century’s Gilded Age.

This has strained the social fabric of the nation – fueling anger and frustration, a rising tide of drug overdoses and deaths of despair, even tempting some working-class people to embrace Trumpism and white nationalism.

The success of Amazon’s “shock and awe” campaign against workers who dared try to bring a union to their Bessemer, Alabama warehouse exemplifies the immense political power the architects of this growing inequality now wield.

It’s an alarming omen of the future.

In Amazon warehouses like Bessemer, workers are treated like robots. Algorithms relentlessly impose dangerous production quotas. They get two 30-minute breaks each ten-hour day. Every movement is monitored.

Amazon delivery drivers report being instructed to turn off their safety apps so they can meet their quotas.

Others report having to urinate into bottles because of delivery timing pressures.

Even though public support for unions is as high as it’s been in 50 years – 60 million American workers would join a union today if they could – Bessemer workers were outgunned by a behemoth whose market capitalization exceeds Australia’s GDP.

The National Labor Relations Act makes it illegal for employers to fire workers for trying to organize a union. But the penalties employees for violating the Act are so laughably small (rehiring the worker and providing back pay) that employers like Amazon routinely do it anyway.

Amazon may be the future of the American economy, but if that future is to have room for the kind of prosperous working families that fifty years ago defined American capitalism, unions are critical.

In March, the House of Representatives passed legislation designed to level the field. It’s called the Protect the Right to Organize Act (PRO Act). The Senate version has 47 Democratic co-sponsors. It needs three more to give the PRO Act a fighting chance of getting to Joe Biden’s desk.

The PRO Act would end many of the practices Amazon used to defeat the union effort in Bessemer. Real penalties would be imposed on companies and corporate officers who retaliate against union advocates or otherwise violate the National Labor Relations Act.

The PRO Act would make it easier for workers to form a union, with the aim of protecting them from unfair working conditions.

The PRO Act alone won’t end economic inequality or return prosperity and opportunity to America’s working families. But passage of the PRO Act would help.

It would also send a clear signal that ours is truly a government “of the people” – such as the million people who work for Amazon today, not the one multi-billionaire at the top, and of the vast majority of Americans who are working harder than ever today and getting nowhere, in America’s Second Gilded Age.