Our Responsibility to Climate Migrants 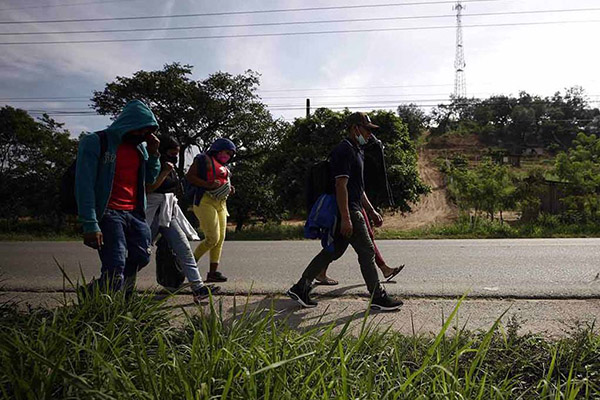 RIPTON, VERMONT – Last November, as the most active Atlantic hurricane season ever recorded ground to a close, the last two big storms – Eta and Iota – ripped into Central America. A Washington Post reporter covering their aftermath interviewed a Honduran woman named Blanca Costa, who was sheltering beneath a highway overpass. She supported her three daughters by working as a trash collector, and had three horses to pull her garbage cart. Except now the horses had drowned. “I’ll just have to go on foot now,” said Costa, 40, one of about 100 people finding refuge under the bridge. “But it will be more icult.”

The storms caused massive damage in Central America. According to early estimates, the economic toll in Honduras was equivalent to 40% of the country’s GDP. So, it should not surprise anyone that plenty of people from the region are now on the move.

When climate-driven disasters strike, the vast majority of people don’t need or want to move far. If drought drives a farm out of business, workers usually look for new jobs as near to home as possible. When extreme weather destroys homes, people seek a temporary escape, not permanent relocation. But as adverse climate events become more extreme – and they will – people will need to move farther for longer.

It is of course entirely unfair that Hondurans have done so little to cause the climate crisis that is now taking such a costly toll there. Someone who collects trash with a horse-drawn cart does not generate a lot of carbon dioxide emissions, in contrast to someone in the United States driving a 310-horsepower Ford Bronco SUV.

By any moral calculation, therefore, the US should be figuring out what its responsibilities are to Central American climate migrants. And, whether they cross international borders or not, it should be US policy to make their journeys as safe and humane as possible.

So, if the top priority is to limit temperature increases so that climate disasters force fewer people from their homes, the second priority is to manage the trauma of involuntary migration. Whether governments like it or not, millions of people globally are already resorting to migration to cope with the climate crisis. The US in particular must respond with more than walls, cages, or the stern warning issued by President Joe Biden’s administration to Central Americans: “do not come.”

But climate migrants aren’t heading to the US because they want to. They have no choice, and their journey is at least as traumatic as the storms that caused it. Families are torn apart, and people travel in difficult and dangerous conditions. Some die, others are killed, and many more are robbed, extorted, or assaulted.

The main cause of the danger, death, and suffering migrants face is often international borders. When desperate people are denied the right to cross a frontier safely and legally, they have no option but to do so under cover of darkness, across deserts and oceans, and over fences and walls.

This militarization is an increasingly high-tech enterprise. Drones now patrol borders, while facial recognition tools and powerful artificial-intelligence systems identify and track people trying to cross them. Many tech companies that have cultivated feel-good corporate images are in fact deeply involved in surveilling people trying to escape some of the most difficult and dangerous conditions on the planet.

The firms currently profiting from turning borders into death traps will not simply walk away from this lucrative business, while governments hooked on their own “tough on migration” policies won’t back down without a fight. But those seeking justice for migrants and refugees have been fighting and winning immigration battles on the streets. In addition, activists and labor unions are pushing companies to ditch their border-surveillance and detention contracts – and investors are noticing, with Microsoft’s ties with US Immigration and Customs Enforcement the latest to be put under the spotlight.

The climate movement must now act in solidarity with migrant and refugee activists and be part of their efforts to ensure safe, legal migration. We should be thinking about how to support people making dangerous journeys, how to create meaningful work for them, and how to provide education, housing, and health care as they seek new places to settle. And we should be thinking about how to build communities that encompass both new arrivals and existing residents.

These questions have already roiled the politics of many countries. But they won’t go away – quite the contrary. For the sake of climate migrants everywhere, we must address them. Our CO2 emissions pay no attention to national borders, and nor should our compassion.